The granary of S. Maria del Preposito (or S. Maria “ad Submonte” as defined in a document from the Benevento Abbey of San Modesto) is the most important element of the territory of Summonte. Its most ancient attestation dates back to the 10th century. In 1274 it was ceded in trade-in to the abbey of Montevergine, becoming the nucleus of aggregation of the new Fontanelle farmhouse.

Monastic structures like this one promote the progressive transformation of the agricultural landscape into a rational production system. In this area are spread chestnut (largely prevalent), vine, olive and hazelnut crops, along with special crops such as flax and especially the mulberry (attested around 1037 in the territory of Summonte is the first testimony of the genus in southern Italy). The ecclesiastical foundations also favor the residential centralization.

In this context, the Norman penetration towards the end of the eleventh century was introduced with the aim of strategic control of the territory. In Summonte’s case, this seems to be the reason for the location of the castle (documented for the first time in 1094) and for the fortification of the farmhouse. The latter may have been, before this phase, not the most significant of the area, from the demographic point of view.

After all, in 1159 the audience is outside the castrum and the inhabitants of the fortified nucleus have limited rights to pasture and wood. Even the troubled relations between the feudatories of Summonte and the community submitted to the abbey of Montevergine bear witness to the importance of the military control function compared to that of production. Within the village there were two churches. The most important was dedicated to St. Nicholas (generally widespread worship around the eleventh century), the other belonging to the castle was dedicated to San Vito. We have only very limited information about the officia connotating the Castrian settlement.

Therefore, it can be concluded that Summonte was a military garrison until the dawn of modernity. The surviving element of this system of fortifications is the cylindrical tower with a truncated conical base (end of the 13th-early 15th centuries). Despite the formal analogies with the castle of Termoli, the stratigraphic analysis reported the foundation of the castrum at the time of Roger II. Further investigations, exhausted last year, as well as confirming the attribution to the Norman period, have shown that this well-defined architecture had been superimposed on a previous XI century fortification, consisting of a tower and an enclosure of wooden poles, without any structural connection with pre-existing parts. 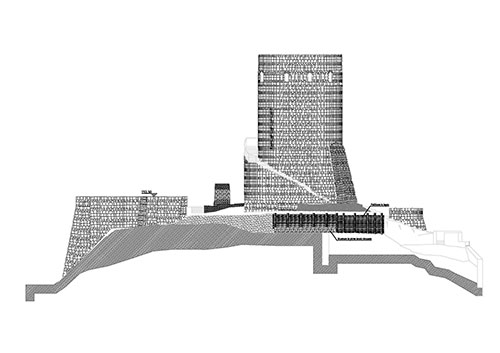 The typology, which at first sight could be assimilated to the medieval fortified buildings found in Sicily, where the Norman experience intersects with the Islamic experience with interesting results (see the example of Adernò), to a more careful evaluation reveals rather characteristics of simple military garrisons of late ancient derivation widely used by the Byzantines. It is therefore also a munitio or better still a balium militum more than a feudal residence and and represents the antecedent of the Termolese fortress. With this term (balium, ballium, baglio), perhaps derived from an English term associated with motta and attested in various regions of the South, it can be considered a square, rectangular or trapezoidal enclosure formed by walls of not great height, manufactured in rough stone (in some cases also tanning stone) and mortar, reinforced at the corners by small towers with a circular or square section. Inside this enclosure there was a large courtyard surrounded by a few rooms of reduced depth (with the exception of the side opposite the entrance door where the largest volume was found), juxtaposed to the perimeter defenses. The surfaces included in the fence range from about 1200 to 2400 square meters.

There is evidence of a Balium militum in Montefusco (AV) and a church still remembers its presence (S.Giovanni del Vaglio). The fact that at Summonte this particular architectural structure overlaps with the antecedent one, completely erasing it, it subtracts its constitutive phase from that evolutionary and integrative process diagram well delineated by Aldo A. Settia (14) and demonstrates its value as a true model military linked to precise strategic schemes and codified war practices.

The events that have affected Summonte between the eleventh and thirteenth centuries allow us to explain the succession of different defensive structures. The fortification of the inhabited center is attested for the first time in 1094, but it is probable, in light of the data obtained from the excavation, that it is a walled village with a tower placed at the center of the aggregate of houses, in the highest part local. The castrum Submontis was part of the county of Avellino, held by Ruggero de Aquila, and was assigned in suffix to Raone di Fraineta. It constituted one of the advanced points of defense of the Avellinese valley and controlled the routes that, coming from the Caudina valley and from Benevento, were directed towards Avellino and Salerno.

In 1134 it was taken and destroyed by Roger II who, after having reconstructed it in the balium forms, had it administered by Raone Malerba. In this case, the connection between the territorial function and the military garrison model seems evident. When in the first half of 1300 Summonte passed to the Leonessa family, the little fortress, considered unreliable, was transformed into a border sighting tower and its internal distribution as well as its overall configuration was altered. The balium model, in fact, even if adapted to the morphology of the places, enriched with further elements and applied also to constructions of considerable size, maintained a rigidity of plant and a denotative vulnerability of the very slow evolution of defensive techniques in the Swabian area. The tower was elevated on the ruins of the castle where the Malerba family probably lived and held the local fiefdom in the Norman period. Around the mid-nineties, however, were found the structures of the Norman-Swabian castle in Summonte, following an archaeological excavation conducted by the young archaeologist Domenico Camardo with the supervision of the Superintendence of Archaeological Heritage of Salerno, Avellino and Benevento.
The find has posed different interpretative problems. Around the tower, from the Angevin period, there emerged the conspicuous remains of a quadrangular fortress, with cylindrical corner towers and with the central body emerging as a mastio, then incorporated into the tower of the fourteenth century.